About My Origin as an Artist

I can’t remember a time when I wasn’t creating.  As a small child, I made mud pies and collages of flower petals, moss, and even insect parts.  I received rave reviews from my mother who seemed impressed (though she probably would rather that I’d not decorated her freshly painted seafoam colored walls with violet crayon nor the family television screen with Easter Seals).  As a young girl, I tried needlepoint, macrame, and ceramics before a few more years and a lot more patience allowed a dive into drawing, watercolor, and sculpture.  At university, I took minors in Art and Theatre Design, and afterward, I taught art and drama (and English and Earth science).  I also produced seven novels while freelancing as a graphic artist and web designer.

And then, in 2006, on a whim, I listed one of my paintings, a miniature landscape no bigger than a matchbox, on ebay (Don’t ask me why I used the brush name, “O. Rose,” because I have no earthly idea!).  To my shock, that tiny painting sold to a doll house collector for $17.58—enough for dinner for two, in those days!  Was that my eureka moment?  Not exactly!  I figured it was a fluke.  So I tried another.  Which also sold.  Hmm… 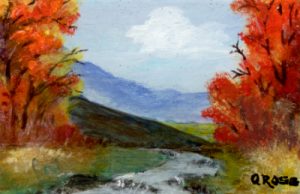 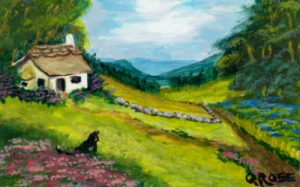 Was I onto something?  I honestly didn’t know.  But I did know that I couldn’t make a living on $17.58 a couple of times a week, so next I tried some 5″ x 7″ folk-art kitties and mousies. 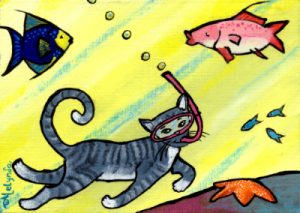 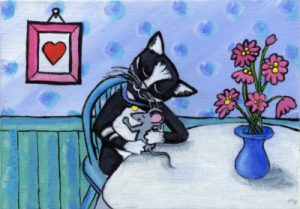 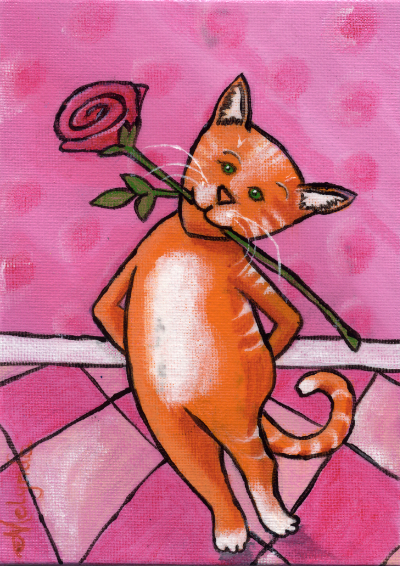 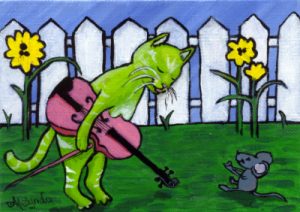 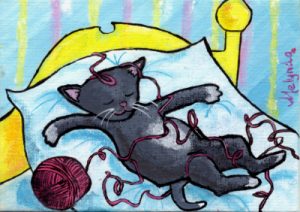 To my astonishment (and possibly yours), these too sold, for around $30 each.  But I still wasn’t making enough to put much of a meaningful dent in the bottom line of ye olde household budget.  (But hey, at least I was painting under my own name, now!)

What was I to do?

Again, I changed gears—and sold the first of my big abstracts.

In the beginning, I let paintings go for little more than cost, but over the next three years, my skill grew, I developed a following, and sales increased substantially. I took a brush name, “Melynda, The Brazen Eye” ( TheBrazenEye , www.TheBrazenEye.com ), opened an online gallery and sold some 350 paintings to collectors all over the world.  I was taking commissions.  And I loved what I was doing.

In 2009, a large, brick-and-mortar gallery with showrooms in Dubai, Paris, London, Ft. Lauderdale, Orlando, and Tokyo approached me.  They had a deal with Celebrity Cruises to sell art in the cruise line’s onboard galleries, and they wanted all the paintings I could produce.  It was to be a $700K a year deal, and I had two kids to support.  So, to say I was thrilled is a gross understatement.

But then, the Great Recession shattered everything.  Suddenly, no one was buying art or much of anything else.  The cruise industry tanked, and the gallery closed its doors.  Even my ebay sales went down the tubes.  Bills were piling up, and I still had two children to provide for.  I needed to pivot.

In 2010, I changed the name of the studio to Deep Urban Fine Art ( DeepUrban , www.DeepUrban.com ) in order to accommodate the addition of other artists.  But the recession was still with us, and so a return to the classroom was in order.  I loved my students, but teaching had become frustrating (Don’t get me started on the subject of our education system’s failings!).  I didn’t just need to pivot.  I needed to reboot.

Leaving the classroom and Florida behind, my family and I moved across the country, to the beautiful Pacific Northwest of the United States.  The move extended my absence from the studio, but all things pass.  I’m painting now, working as a solo artist, and loving it.  Color, texture, wash, and stroke combine to speak an uncanny language that conveys emotion, and my happiness in life shows up in my painting.

I live with my beloved husband and 3 studio cats in Maple Valley, a small town outside of Seattle, Washington, nestled in the foothills of the Cascade Mountains.  When I’m not in the studio, you might find me writing, reading, hiking, playing video or board games, baking, or torturing my family with my horrible piano playing. The most important thing to know about me is that I live by the Golden Rule: treat others as you wish to be treated.  It’s my goal in life to make the world a better place—and to have a great time while I’m at it.  When I’m painting, I’m doing both.

About the Works I Create

I paint strongly emotive, large-scale abstract paintings.  My works are all hand-painted originals, not prints of any kind.  My materials are designed to last generations, not a year or two.

About Your Support of the Arts

The “paintings” found in retail stores are usually just cheap prints “hand embellished” with careless dabs of thick, clear paint.  By purchasing from me, you’re supporting a real artist, not the exploitation of workers forced to toil in some sweat-shop assembly line art mill in Who-Knows-Where.  Without you, artists like me wouldn’t exist.  I thank you.

About Shipping, Stretching, and Hanging

Shipping is free within the continental United States and Canada.  For anywhere else, please read my Shipping and Returns page carefully.

For paintings over 30 inches wide or long, I offer a large discount when you let me remove your painting from its stretcher bars and ship it to you rolled in a sturdy tube.  This is much safer for the painting and is much less expensive for you.  If you opt for this discount, you can have your painting re-mounted on stretcher bars at a local frame shop or DIY.

Two hundred years ago, an oil painting was something only the rich could afford, so the words “oil painting” came to mean “luxury.”  Then along came acrylics.

When acrylic paint was first invented almost 80 years ago, it had a justifiably bad reputation in the art world.  But the technology quickly improved, and today’s acrylic is, in my opinion, far superior to oil.

Modern acrylic colors are just as rich as oil colors, but they offer a greater range of texture and sheen.  They last just as long as oils, but they don’t decay, crack, or chip like oils can.  Fading is no longer a problem, because acrylics come in a wide range of rich, lightfast colors.  Acrylic also gives artists amazing new properties to work with for all sorts of special effects, yet if we want to make an acrylic painting look indistinguishable from an oil painting, we can.

Acrylics are also healthier for people and for the Earth.  Some of the ingredients in oil paints can cause physical problems like headache, sinus and skin disorders, and even cancer.  It and the solvent the artists must use to clean their oil painting brushes and equipment has to be treated like toxic waste, because it is.  Not so with acrylics

Acrylic paint is simply better than oil paint.  It’s an amazing, wonderful medium, and I love it.  You will too.

Some artists and galleries will tell you with pride that they only sell oil paintings, never acrylics.  That’s just silly.  They’re pandering to the buyer who doesn’t know any better, the one still burdened with prejudices from the Renaissance and the 1950’s.

It’s time to leave the old “Oil is better than acrylic” nonsense behind—along with skeleton keys, 8-tracks, and outdoor plumbing.